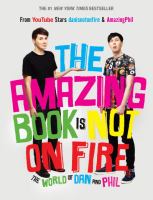 The Amazing Book Is Not on Fire

The World of Dan and Phil

Oh my goodness. Thank you Eltham for having this book! I read this book last year in probably September and have loved Dan and Phil since. I would highly recommend you read this book if you want to discover new youtubers like I did. They are two amazing guys who I really hope will come back to Australia. Once again thank you Eltham.

This book is art!

HEY IMMA GIVE MYSELF A CHEEKY (*insert lenny face ;)*) SELF-PROMO!
I HAVE A PHAN ACCOUNT ON INSTAGRAM!
@Phantasthicclester and @frandom.things
I HOPE WE CAN BECOME INTERNET FRIENDS :)

anyone else excited for christmas baking?

ugh i hate the fact that this book is under Dan's name, and ONLY Dan's name. like, bro, they're a DUO. You never have just Dan or just Phil. It's always Dan AND Phil. I honestly don't understand why it's only Dan. Sorry for the rant but it's true.

This book is my bible.
Phan is Real
-Cheeky self promo- ph4ndom (insta)

This is not a serious book. Then again, I wasn't expecting it to be serious. What I was expecting was a fun, hilarious book that would have me smiling like the huge dork that I am, and laughing out loud in a room full of people and having them look a me like I'm crazy... And that's exactly what I got. It was adorable, and fun, and exactly what you would expect from Dan and Phil. This book was totally and completely Ace.

I'm not much of a Youtube watcher... but once upon a time ago, I stumbled across Dan's How To Speak Internet colab video that he did with Jack and Finn. It was hilarious and I couldn't stop laughing, and I absolutely loved it... So what did I do after that? Well, I am not ashamed to admit that I binge watched all of the videos that he had done thus far {he had been youtubing for 3 years by that point, so there were quite a few} and then of course, if you're waching Danisnotonfire videos, you're inevitably going to meet Phil. So, to make a long and nonsensical story short... I went from not being a big Youtube watcher to watching these two almost religiously. What I like so much about Dan and Phil is that on one hand, you have guys who do things that are totally and utterly cringe worthy and hilariously dorky. But then you turn around, and almost right away, they'll say something so sweet/serious/profound, and then I'm just like. We could be friends I think.. And I don't mean that in a weird I'm gonna be a stalker way.

Anyway, onto the review. I thought this book was super fun. All the pages were in color, and you get to see a little more into the lives of Dan and Phil. There's a whole bunch of random awesomeness . I thoroughly enjoyed reading about what happened in Vegas {who knew playing in the casino could be so dangerous?} and how they got to interview 1D when they weren't going to be able to {that took major guts, btw} And I liked the addition of "Going Deep With Dan And Phil"... that was entertaining. I also liked that in the narration, not only were they talking to you, they were interacting and bantering with each other as well... It almost made it seem like you were watching one of their videos.

yayyy dan and phil i love u guys

THE CAT WHISKERS COME FROM WITHIN

yo whats up guys its NoT marzia but don't worry were all fans of dan and phil am I right and phils ful name is phil up lester right?