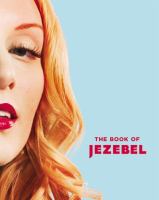 The Book of Jezebel

An Illustrated Encyclopedia of Lady Things

From A to Z, this work covers the spectrum of defining the woman in contemporary society, and includes short bios of famous and influential women plus cultural terminology, concepts, and the gamut of interests pertaining to womanhood.
Publisher: New York : Grand Central Publishing, 2013
Edition: First edition
ISBN: 9781455502806
1455502804

Even though my political stance differs significantly from the author's, it was a great read. It is formatted like a dictionary, with satirical definitions for everyday things (mostly nouns). Some definitions made me laugh, some made me shake my head fiercely in disagreement, but I truly enjoyed the journey.

This encyclopedia style book is funny and intelligent. It offers interesting outlooks about the modern woman and feminism.

"Zygote:
To young to be a slut, so way more entitled to civil rights than you are."

The good news: feminism happened, so men don't get to just run around slapping or asses with impunity anymore. The bad news: now that overtly piggish behavior is heavily, heavily socially discouraged ,theres a subset of men who resort to more subtle means when thy want to act like jerks. Chief among them is the Nice Guy. A “Nice Guy” with a capital NG doesn't refer to a man who happens to be a genuinely kind person. Hooray for the kind, caring, conscientious people! We mean the sort of guy who has declared himself to be nice, and thus deserving of positive (usually sexual) attention from the female of his choice, upon whom he has often projected an elaborate fantasy of perfection and willingness that rarely has anything to do with the subjects actual feelings or desires. When a nice guy is romantically rejected by a woman he wants, he lashes out at her, wondering why that dumb cunt won't go out with him. After all, he has been Nice!

Schrei thinks this title is suitable for All Ages