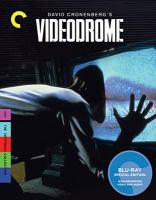 When Max Renn goes looking for edgy new shows for his sleazy cable TV station, he stumbles across the pirate broadcast of a hyperviolent torture show called Videodrome. As he struggles to unearth the origins of the program, he embarks on a hallucinatory journey into a shadow world of right-wing conspiracies, sadomasochistic sex games, and bodily transformation.
Publisher: [New York] : Criterion Collection, [2010]
Edition: Director-approved Blu-ray special edition
Copyright Date: ©2010
ISBN: 9781604653212
1604653213

📺 Cronenberg bungled this one, repulsive and grotesque because of his writing and direction. James Woods is a sleazy cable operator, looking for porno shows, when he runs across a sadistic series called "Videodrome." Watch enough sex and violence and a new organ grows in your brain (or maybe it's just a tumor, sorry, tumour) that causes hallucinations. Eventually, though, you go over to the Light Side. It's all a conspiracy by the Moral Majority to reform the whole country in their image. If you're having trouble following that, wait'll you see this confusing shambles. The effects by Rick Baker, who's normally pretty good, are ugly. Note that the sex and violence were cut big-time by Universal to get an R rating. However, this version has been restored to its former glory. Don't say The Observer didn't warn you!

I've always thought of Videodrome as the film that put David Cronenberg on the map, critically, and maybe that's so. But it wasn't a popular hit at all when it was new and seems to have built a word-of-mouth prestige. It's very engaging if unsatisfying in terms of making sense, sf-wise. The special effects were state-of-the-art in the days before CGI destroyed special effects, and when the hand thrusts out of the TV screen pointing a gun, it's pretty breathtaking. The effects in Videodrome are slow, though, at a time when effects were getting lightning-quick; see the much more immediately successful and far lower-budgeted The Evil Dead, made the same year as Videodrome. Unlike ED, however, Videodrome doesn't want to be funny, and it isn't. Rather, it portrays the mental disintegration of an unlikable man over the course of a few weeks, at most, after he sees the edgy underground TV show he wants to buy for his cable TV channel in Toronto. He learns that the show is the hook into mind-possession via TV--maybe. At any rate, he is hooked, and after donning the virtual reality helmet the head of Videodrome's (it's the name of a TV production outfit) parent company and agreeing to go with his hallucinations, subsequent events seem, despite their surprises, foreordained. It must be said that the color cinematography, production design, and editing are top-drawer, and the acting is as good as it should be within the story's nothing-is-quite-what-it-seems context. Does anyone else but me think that, once Max (James Woods) dons the helmet, all that follows is illusory? We never see him take it off. --Ray Olson

David Cronenberg's most visionary and audacious film up to the time of its making, Videodrome is a fascinating rumination on humanity, technology, entertainment, sex, and politics that is virtually incomprehensible on first viewing- which is why you probably should watch it more than once.

Videodrome is perhaps one of David Cronenberg's most essential films. Featuring nearly all of his trademarks/obsessions: flesh, eroticism, machinery, bodily transformation, violence and of course, disgusting special effects. It's a bizarre little sci-fi thriller about a small television station president (James Woods) who picks up a pirate transmission of a show called Videodrome which portrays acts of murder and torture. He tries to trace its origins, but soon discovers that it is more than just a TV show. It has the power to induce hallucinations in its viewers and could be potentially be used as a form of mind control. He takes it upon himself to uncover the sinister plot behind this deadly television signal.

Not your average plotline indeed. Videodrome may indeed be one of the most bizarre films ever released by a Hollywood studio. It's a film that a majority of moviegoing audiences will have no appreciation for whatsoever, but a fringe of weirdo movie lovers (such as myself) should find much to love about it. I've seen a lot, however Videodrome still manages to give me chills. It's a genuinely creepy movie, and the weirdo special effects are something to behold. Who could forget the images of the breathing videotapes or the cassette slot opening in James Woods' stomach?

Videodrome is highly recommended for fans of bizarre, twisted films and especially David Cronenberg fans. Be sure to check out the new Criterion DVD with a load of extras including commentary from Cronenberg and his DP, as well as actors James Woods and Deborah Harry.

If you loved this movie, check out Await Further Instructions.

Let's face it, folks - 1983's "Videodrome" certainly could've been a helluva lot better when you seriously take into consideration that Canadian-born director, David Cronenberg had a $6 million budget to work with on this project.

But, of course - This is "old-school" horror and part of the problem with "Videodrome" is that its pre-CGI gore effects were definitely quite clumsy and, yes, almost laughable-looking for the most part.

Another annoyingly noticeable problem with "Videodrome" was that Cronenberg (who also wrote this film's screenplay) was expecting his audience to ignore how preposterous this picture's story really was and accept a lot of inanity without calling into question any sense of reasonable logic that was required to make it all legitimately work.

Yeah. OK. Back 36 years ago - Cronenberg's "Videodrome" may have, indeed, shocked its audience right out of its socks with its flagrant and sexually twisted audacity.

But, on the other hand - Seeing it today is certainly quite a different (and, yes, disappointing) matter all together - 'Cause I seriously think that crafty, old Cronenberg was banking way too heavily on the viewer not taking the time to intelligently think this film's decidedly dark and demented story through to its utterly wacky conclusion.

Anyway - If you can, perhaps, try to view "Videodrome" as being something of a perverted comedy (rather than a straight-faced horror film), then, maybe (just maybe) it will offer you the sort of cinematic distraction that you so desperately crave.

This 1983 drama/fantasy film is about a trashy TV channel that decides to launch a new graphic and gory show in order to draw viewers in. The channel president’s girlfriend auditions for the show then never makes an appearance again, leading the president of the channel to wonder if maybe the violence of the show isn’t as fake as he once thought. The premise of this film was just weird enough to be interesting, and well written enough to be believable. The actors did a great job at playing their roles and the film production was ahead of its time. I would rate this movie 4/5 stars. @The_Reviewer of the Hamilton Public Library Teen Review Board

Definately dated but a classic in its own right. Although I enjoyed seeing a Beta cassette and player again, along with some interesting scenes, I felt something was lacking in this film.

Saw this movie in a “Cult Movies” list from The Seattle Public library: https://sccl.bibliocommons.com/list/share/75166733_chricelle/217290416_cult_movies_-_part_1
and attracted by Cronenberg’s many other works that I enjoyed (Naked Lunch, Crash, A History of Violence, Eastern Promises, A Dangerous Method, Maps to the Stars …etc.) Watched the entire film and a few scenes twice. Also read the “Production Notes” in special features as well. But still find the sci-fi concepts confusing or unrealistic, “horror” scenes just weird (see note) and the retina helmet, which could alter human mind and body, low tech (more advanced version of Oculus VR/ Google Glass.) Must be groundbreaking and scary in 1982 when the film was released (in perspective, IBM Personal Computer launched the Personal Compute in 1981) but average in all aspects today.

Note (quote from “Production Notes”):
Because Cronenberg is perhaps best known for the exploding heads in "Scanners," any mention of "altering" in his movies conjures up images of very bizarre occurrences. Videodrome lives up to expectations, but Cronenberg is quick to point out that, no matter how critical special effects are to the movie, they are absolutely not what it is about. In fact, he says, "I deliberately de-emphasized those elements. It's got a very seedy look to it, not high-tech at all. It's not an action picture, like 'Scanners.' Like 'The Brood,' it's a character study in the horror genre, although it does take a couple of extreme turns."

Being an old cult classic, many many many quotes in IMDb already, likely these as well:

The television screen has become the retina of the mind's eye. That's why I refuse to appear on television, except on television. Of course, O'Blivion was not the name I was born with. That's my television name. Soon all of us will have special names, names designed to cause the cathode ray tube to resonate.

===
After all, there is nothing real outside our perception of reality, is there? You can see that can't you?

Why would anybody watch a scum show like Videodrome? Why did you watch it, Max?
-Business reasons
Sure, sure... what about the other reasons? Why deny you get your kicks out of watching torturing and murder?
===
Max, I'm so glad you've came to me. I've been through it all myself you see. Your reality is already half video hallucination. If you're not careful, it will become total hallucination. You'll have to learn to live in a very strange new world... I had a brain tumour and I had visions. I believe the visions cause the tumour and not the reverse. I can feel the visions coalsce and become flesh. Uncontrollable flesh. But when they removed the tumour, it was called Videodrome. I was the-- I... I... was... Videodrome's... first victim...
===
First it controlled her mind, then it destroyed her body... Long live the new flesh!

AtomicFez thinks this title is suitable for 18 years and over