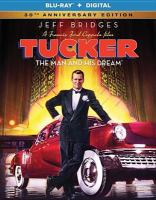 The Man and His Dream

Preston Tucker (making his closing arguments to the jury): "When I was a boy, I used to, uh... I used to read all about Edison, and the Wright brothers... Mr. Ford, they were, they were my heroes... 'rags to riches' that's not just the name of a book; that's, what this country was all about! ...We invented the free enterprise system, where anybody, no matter who he was, where he came from, what class he belonged to... If he came up with a better idea, about ANYTHING, there's no limit to how far he could go... I grew up a generation too late I guess because now the way the system works... The loner; the dreamer; the CRACKPOT, who, comes up with some CRAZY IDEA that everybody LAUGHS at, that LATER, turns out to REVOLUTIONIZE THE WORLD... HE'S SQUASHED, FROM ABOVE, BEFORE HE EVEN GETS HIS HEAD OUT OF THE WATER, BECAUSE THE BUREAUCRATS, THEY'D RATHER KILL A NEW IDEA THAN LET IT ROCK THE BOAT!" (cont'd)

Preston Tucker (making his closing arguments to the jury) (cont'd): "...IF BENJAMIN FRANKLIN WERE ALIVE TODAY, HE'D BE THROWN IN JAIL FOR SAILING A KITE WITHOUT A LICENSE!" (jury laughs) "It's true! ...We're all puffed up with ourselves now because we invented *the bomb*... Dropped the... Beat the daylights out of the Japanese; the Nazis... But if 'big business' closes the door on THE LITTLE GUY WITH A NEW IDEA, WE'RE NOT ONLY CLOSING THE DOOR ON PROGRESS, BUT WE'RE SABOTAGING EVERYTHING THAT WE FOUGHT FOR! ...EVERYTHING THAT THE COUNTRY STANDS FOR!! And one day, we're gonna find ourselves at the bottom of the heap, instead of king of the hill, having no idea how we got there; buying our radios and our cars from our former enemies! ...I don't believe that's gonna happen; I *can't* believe it, cuz... if I ever, stop believing in plain old common horse-sense of the American people... there's no way I could get out of bed in the morning... Thank you."

(After the trial outside the courthouse, with lots of spectators admiring Tucker's cars) Abe: "They *love* the cars, the people! Drives me crazy, that the motor company's dead... They'll never be made!" Preston Tucker: "We made 'em." Abe: "Fifty cars..." Preston Tucker: "Aw, what's the difference -- fifty or fifty million. That's only machinery! ...It's the *idea* that counts, Abe... The dream..."

(Closing title card) "Although only fifty Tuckers were ever produced, forty six of them are still road worthy (here in '88) and in use today. Tucker's innovations of aerodynamic styling, padded dash, pop out windows, seat belts, fuel injection and disc brakes were slowly adopted by Detroit and are found in the cars you are driving now. Preston Tucker died of an illness six years after the trial, but his ideas will live forever."

This biopic had all the components (for me) to be great. Francis Ford Coppola in the driver's seat, so to speak, (forgive the pun); '80s songwriter Joe Jackson on score; Jeff Bridges, whom I admire very much, in the lead role... Unfortunately those factors just didn't gel. I would've preferred to see Coppola tone down Tucker, and his cohorts, and his family's smarminess. They were just too cutesy; too heroic; too over-the-top. They weren't presented realistically enough for my liking. Joe Jackson's score was way too prevalent with the big band numbers blasting away. I wasn't watching this for the tunes, and I felt they should've been more subdued. Bridges was terrific, as usual, with the material he was given. Martin Landau as well (another great actor, and a Golden Globe winner for this portrayal). Regardless of the minor disappointments, I did enjoy the film, and I'm giving it 4½ stars for the story of the amazing Preston Tucker's ingenuity and innovation in his automobile designs, and his courage on challenging the big three. An incredibly 'driven' (sorry) individual quashed by Goliath's political sledgehammer.

There are no ages for this title yet.