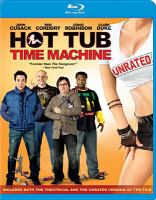 Where is My Original Comment.XXXXXXXXXXXSATAN
TARA i Need to Clone You.
-RR
-LS

More references to the 80's and silly sex jokes than actually funny. Heard great things, but was left thoroughly underwhelmed, especially considering that I can remember living the 80's.

One of the more pleasant DVD surprises for me this year, a juvenile gross-out comedy that actually had me laughing out loud! With humour that is as much visual as it is verbal, director Steve Pink’s evocation of the MTV generation is hilarious for those of us who remember it, from the horrible neon jackets and poofy-haired metal bands (Poison!) to Jheri curls, yeti boots, and "Alf" on T.V. Of course the humour rarely rises above boobs and bodily functions with a bit of barf, lots of narcotics, and a surprise cameo by Chevy Chase as a flatulent Time Lord. But it’s all presented with such imagination and the caustic dialogue, laced with F-bombs and priceless one-liners, comes fast and furious enough to cover over the occasional groan. If only the 80s really had been that much fun.

I didn't grow up in the 80s, but this was a fun movie nonetheless. Among the penis jokes, there were strong bonds of friendship and a great moral.
The casting was great (especially the younger versions of themselves) and the characters were likable. Seeing Christopher Glover in this was a trip for those who love Back to the Future. The only change I would have made was making the antagonist, Blaine, become Lou's personal servant, like Biff in BttF.

Oh, and one more thing: in this Sebastian Stan (The Winter Soldier) wears a Reindeer Sweater and fears the Russians (like HYDRA.) Priceless.

Terrific and especially holds warm nostalgia for those of us who grew up during the 1980's. John Cusack heads a fine and funny cast of people who are transported back to the 80's via a time travelling hot tub, and get to experience once again their teen years. Enjoyable comedy.

This turned out to be a really funny movie. It was a hoot to look back at tthe ski outfits, designs and colours from the mid-1980's. The sound track also has lots of good hits from the era. It was also filmed at the Fernie Ski Area here in BC.

It was an OK funny movie. I liked it a lot.

Four guys get transported back to 1986 while relaxing in a ski resort hot tub. Once there the guys must decide whether to retrace their past or try and alter their future. The various scenes highlight the many cultural changes that have occured in the last twenty five years or so. Otherwise this movie is basically a slapstick comedy of one-liners. Although not a great movie it does have some funny moments.

Reading_Right thinks this title is suitable for 2 years and under

gage2010 thinks this title is suitable for 16 years and over

jgrnlees thinks this title is suitable for 17 years and over

bdls206 thinks this title is suitable for 17 years and over

Swtalyssums thinks this title is suitable for 13 years and over

mbazal thinks this title is suitable for 16 years and over

Jacob: I'm kinda right in the middle of a thing right now, but can I text you later?
Girl at Club: Can you what?
Jacob: Are you online at all?
Girl at Club: I have no idea what you're talking about.
Jacob: How do I get a hold of you?
Girl at Club: You come find me.
Jacob: That sounds... exhausting.

Adam: One little change has a ripple effect and it effects everything else. Like a butterfly floats its wings and Tokyo explodes or there's a tsunami, in like, you know, somewhere.
Jacob: Yes exactly. You step on the bug and the f*cking internet is never invented.
Lou: Oh then you'll have to talk to girls with your mouth.
Jacob: Yeah. No. I was more concerned about bigger consequences like not being born.
Lou: Yeah. No. I don't care about that.

Four guy friends, all of them bored with their adult lives, travel back to their respective 80s heydays thanks to a time-bending hot tub.

Disappointed at the way their lives have turned out, four longtime friends reunite at the ski resort where they used to party and find themselves transported back to the year 1986 by a magical jacuzzi. Adam, Lou, Nick, and Jacob have all seen better days; Adam's and Nick's love lives are in the dumps, Lou is clinging to his hard-partying past, and video-game addict Jacob can't even muster the courage to walk outside. A fun stay at the ski resort where the gang made some of their best memories seems like just the thing to cheer everyone up, but after a night of heavy drinking in the hot tub, the four friends wake up to find they're about to live through the '80s a second time. Determined not to make the same mistakes twice, Adam, Lou, Nick, and Jacob decide to take full advantage of the unique opportunity presented to them, and create the lives they've always wanted.